Grease is the word on the streets of Bromley this week. Peter Andre stars in the hotly anticipated tour of one of the UK’s favourite stories, with the film topping the vote of the best musicals. But is this version he one that people want?

After a whirlwind summer romance, leather-clad greaser Danny and girl-next-door Sandy are unexpectedly reunited when she transfers to Rydell High for senior year. But can they survive the trials and tribulations of teenage life and find true love once more? 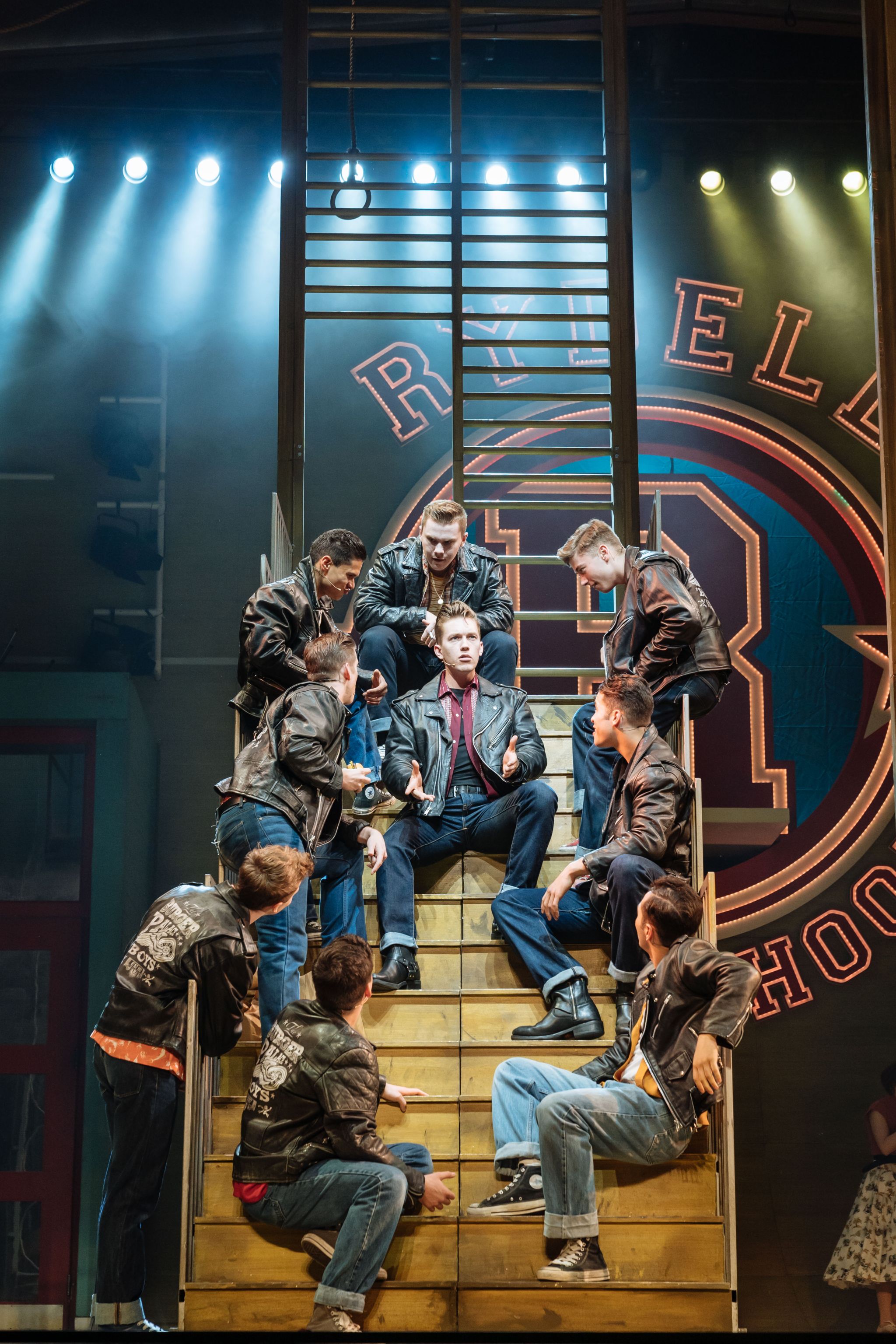 After a not-so-great previous tour of Grease, I certainly had high hopes for this version, and Curve’s production did not disappoint. The tone is set from the first note – the band is loud, the harmonies are strong and the staging shines. The set is minimal but spot on. A cut-out radio DJ booth in the back drop, occupied by the over-the-topVince Fontaine (brilliantly portrayed by Darren Bennett) is the focus over slick scene changes. The entire ensemble’s commitment to characterisation creates a very real and authentic vibe, reinforcing the young high school setting. I’ve never seen Grease done in this way. It feels a bit more raw. It makes you respect the show as a real theatrical piece rather than just the well-known cheesy film franchise.

The plot is different to the film, although not necessarily better. IT feels much longer with more scenes and large chunks of dialogue that aren’t really needed. The story follows a similar general arc but makes the relationship between Danny and Sandy, and Sandy and her peers, much less understandable. Danny is made to be even more of a cruel teenager and really plays the girls. There are times Sandy accepts Danny back without real reason or plot device, and generally she’s much more headstrong and feisty, which doesn’t add up to the other student’s view of her as an innocent goody two shoes. This also means her decision to change at the end to impress Danny packs slightly less punch. (Although I have a wealth of issues with that part entirely. You don’t need to change to get a man!)

Despite all this Martha Kirby plays the role of Sandy incredibly well. The way the part is scripted is the issue, not Martha’s talent, and she signs notes I have never heard a Sandy hit before. Her songs are a real feature! Other highlights include Ryan Anderson (Roger) as whose gorgeous voice takes the lead in Mooning. Peter Andre’s Teen Angel is certainly a crowd-pleaser and I’m sure he has something to do with the strong ticket sales judging by the audience reactions.

The cast are great, but what really takes centre stage is the choreography. It feels fresh without straying too far from Grease‘s renowned and totally recognisable dance moves. It’s the original flavour with a twist, particularly with the hand jive. Greased Lightning is outstanding (and – spoiler alert – the car even flies). Everyone on stage is spectacular at bringing the dance numbers to life and Dale White (Eugene) is seemingly the best mover of them all.

So does Grease live up to its sold-out run in Bromley? It certainly does. The show’s ability to still be original despite its reputation is fantastic. The plot needs work, but a talented cast and dazzling choreography make this incarnation of Grease a winner!

Grease is SOLD OUT at the Churchill Theatre this week but you can add your name to the returns list at the box office. You can catch the show elsewhere as it tours the UK, with a new tour just announced for 2020 too! More information here.