The Olivier award-winning Come From Away is going strong on London’s West End. So what is the recipe to this show’s success? Here’s ten reasons why you need to see Come From Away right now!

Based on true stories, Come From Away tells the tale of 7,000 passengers stranded during the 9/11 disaster, and shows how the people of Gander, Newfoundland, welcomed them into their homes. The musical shows how light can be found in the darkest of times, and that definitely comes through in the outstanding direction and storytelling. The show seamlessly takes you through events while taking you on an emotional rollercoaster, using a pretty bare stage and a few chairs. It’s so clever!

Yes, I know what you’re thinking. A story about 9/11 is funny? Well… it is. This is all part of the wider message of the show, that even in bad times people can lift you up and bring a smile. Look out for sexy cardiologists, stolen BBQs and terrible jokes. I think the world needs more laughter in these murky times and this show gives that!

…but it has it’s sad moments too

This is definitely a show that has you crying with laughter one minute, then sobbing with sadness the next. There are touching moments about the terrorist attacks that make us stop to remember what we lost that day. Come From Away delicately handles these moments and the juxtaposition of the funny and sad brings home the point of the show – that humanity pushes on in the face of adversity. 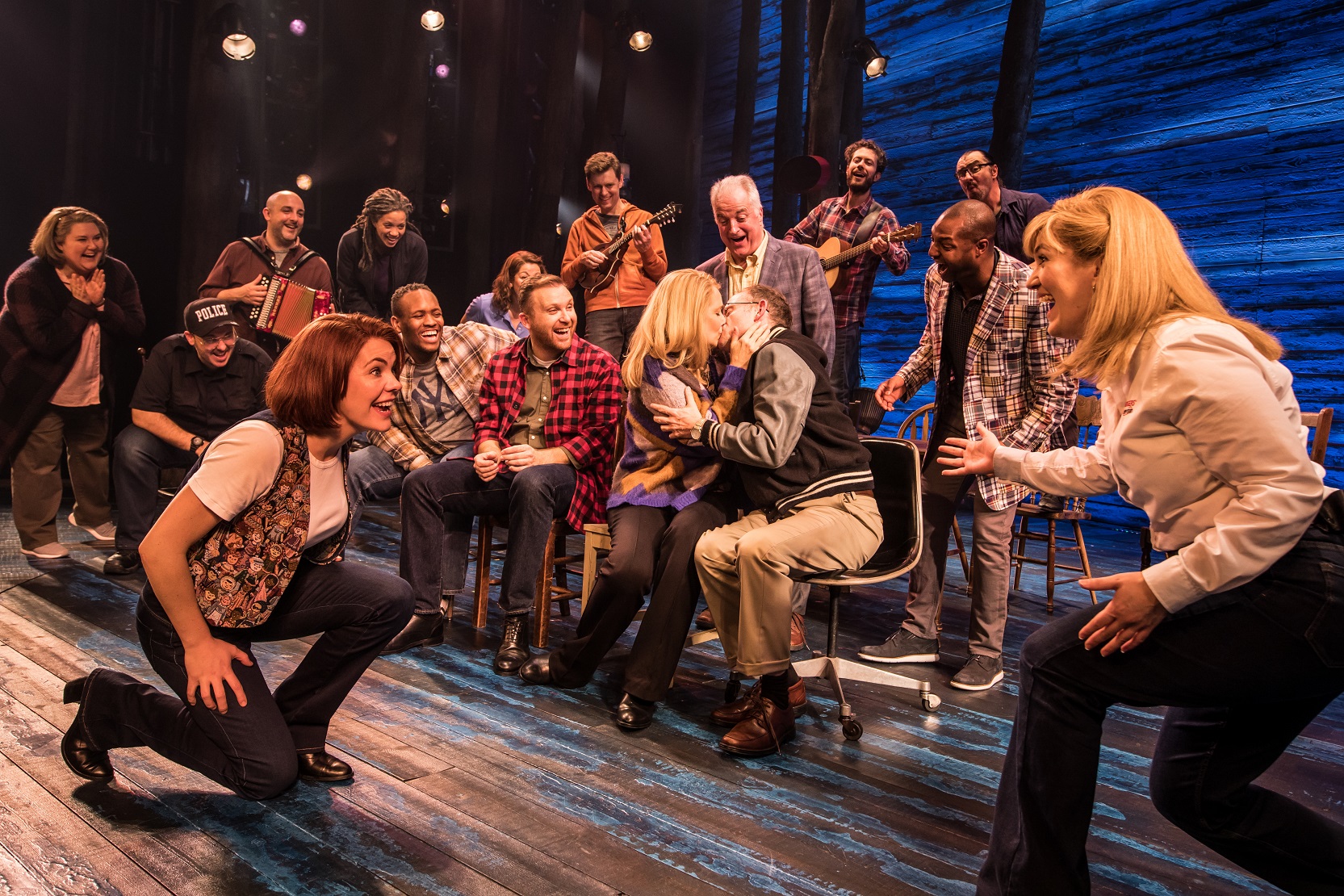 The cast are off-the-scale good…

Where do we begin? A solid group of 12 bring this story to life and they’re all fantastic. True triple threats from beginning to end, portraying several characters (with varying accents) throughout. No easy feat!

…and so are the band

The on-stage band play for pretty much the entire show and sound incredible. They are even part of the show, coming into the action in the middle and owning the play-off at the end. The whole theatre stood and clapped until the very last note!

…and so are the backstage team!

I’ve never seen a show that’s so technically slick. With such pace, the technical team have their work cut out but no-one misses a beat. Even the staging and lighting work hard to feed into the story, and whoever runs the sound desk is a genius with the constantly changing dialogue!

There’s a feminist anthem in there

Me and the Sky is an absolute highlight of the show. Brilliantly sung by Rachel Tucker and the rest of the female ensemble, the song describes how pilot Beverley Bass became a the first pilot to have an all-female crew.

The show’s love story is adorable

Characters Nick and Diane (who are real people) develop an adorable relationship through the show. Although they feel conflicted because of how they meet, it is lovely to watch. Rob Hands and Helen Hobson’s portrayal of them make you really root for the pair!

It’s only 100 minutes straight through

Yep, you heard right. The four words that everyone wants to hear in… 100 minutes, no interval. You’ll be leaving the theatre well before 9.30pm which means a great show AND an early night. You’re welcome!

You leave the theatre feeling positive

With the current state of affairs, any show that can make you leave the theatre feeling uplifted, positive and seeing the good in humanity is surely doing something massively right! It’s a solid 5 stars from me (and if you don’t believe me, check out my full review!)

Come From Away is playing at the Phoenix Theatre in London, currently booking until 15 February 2020. Get your tickets direct from the theatre here or book through London Box Office here!

With thanks to London Box Office for tickets to the show.